Searching the web as I do for all things Will Eisner, I just stumbled upon this blog post from August 26, 2008. I don’t know the author, Ralph Mathieu, but there is nothing in his purported review of a Las Vegas sneak preview of Frank Miller’s “Will Eisner’s The Spirit” movie that makes me suspect this is false.

The bad news–if this is true–for everyone hoping that the movie might be better than its poorly reviewed trailers: Mathieu, writing on his “Ich Liebe Comics” blog, says it is not.

So I saw The Spirit tonight… 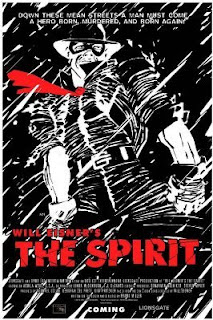 …and I thought it was horrible! No spoilers following:

Tonight over at the Rave movie theater here in Las Vegas, the first advance screening of The Spirit, written and directed by Frank Miller, was held and Rob (a friend who’s my new helper in processing the week’s new books), had gotten two passes Saturday when he and his wife went to a movie there. I was pretty exited because The Spirit isn’t set to open nationwide until December and I thought from seeing two trailers that it would be a fun movie ala Sin City or fun to goof on like that show Mystery Science Theatre did to bad movies.

After seeing the trailer I thought that Frank Miller’s Spirit wouldn’t have much to do with Will Eisner’s creation which I thought was kind of odd as I know that Miller respects Eisner. I’m going to guess that Miller thought what he was doing was updating the character for today’s audiences. I don’t have a problem with movies based on comic books differing from the source work as long as the changes are entertaining and make sense unto themselves as I realize that movies and comics are two different mediums. Anyone who goes into Miller’s movie Spirit expecting it to evoke what they like about Eisner’s comic version will be seriously disappointed, because while I think the movie has some nudge nudge wink wink homages to Eisner’s work and other comics, the movie felt nothing like any of the Spirit stories I’ve read. Again, if Miller’s Spirit movie was entertaining, I wouldn’t have minded, but…