I am appalled and outraged by director Frank Miller’s lack of respect for not one but two cartooning Legends; Will Eisner, and Eisner’s beloved creation The Spirit.

To treat such icons with irreverence is beyond reprehensible. To tarnish a character beloved by millions, both young and old is… hubris is not a strong enough word. Evil. That’s it. Miller is evil.

There is a reason the Spirit has long been one of the most popular cartoon characters in the world. A reason children repeat his well-known catch phrase. A reason Eisner’s stories have so often been adapted into movies, television, and toys since the character’s debut. But Miller has no respect for Eisner’s winning formula, Miller refuses to stick with what works.

Miller seems to think that merely because his own stark visual technique was embraced by millions of fans in hugely successful films and books, we will want to see him do what he is famous for yet again. Miller’s use of heavy black shadows is completely inappropriate for The Spirit’s world, and betrays a complete disdain for the source material, which should be rendered in a more chiaroscuro style, as this illustration shows: 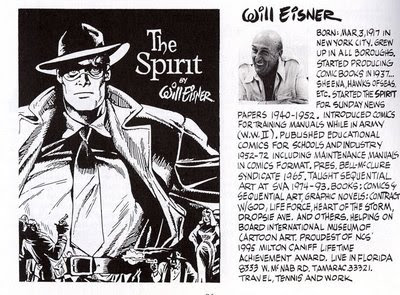 Frank Miller, The Spirit, Will Eisner