The Secret Files of Dr. Drew: A fascinating Will Eisner side project, 1949/50 (TrickCoin.net) 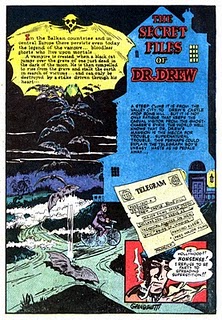 by Frank M. Young
December 30, 2009
Towards the end of the creative peak-era of Will Eisner’s weekly comic book/strip The Spirit, the Eisner Studio had a strong team churning out innovative comics material.
Writers Jules Feiffer and Marilyn Mercer, background artist Jerry Grandenetti and peerless letterer Abe Kangeson were key components in a finely-oiled funnybook machine. All contributed greatly to the high quality of the post-war Spirit feature. (Other notables who contributed to post-war Eisner product include Klaus Nordling, Andre LeBlanc and Dan Barry.)
Eisner’s hand was still deeply felt in the series. His growing ambitions to push comics past their humble street-smart status, and into something that rivaled literature and cinema, found their first strong expression in the 1946-1950 run of The Spirit.

Although Eisner certainly leaned heavily on his creative team, he left his distinct imprint on the work that issued from his studio. He drew from their strengths and made their distinct talents assets in mass media work of high quality

A lesser-known side project of the post-war Eisner Studio appeared in the checkered pages of a comic magazine published by Fiction House. Their comix imprint was as “spicy” and lowbrow as their pulp magazines. Cleavage, violence and sexual suggestion are rife in the assembly-line Fiction House product.