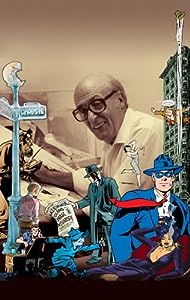 Cover of The Will Eisner Companion
Our UMass panel is named “Will Eisner’s Ideals,”and as the title suggests we’ll be discussing how our own work has been affected by today’s expanding recognition of comics as a medium for serious artistic expression. Many cartoonists of my generation who cut our teeth in underground comix have been And while a lot of pioneering went on in the pages of underground comix, those who pay attention to comics history know that a trailblazing comics creator named Will Eisner had begun leading the way well before underground comix made the scene.
Amazingly, Will Eisner continued to show what comics are capable of in the parade of acclaimed graphic novels he contined to draw tirelessly until his death in 2005 at the age of 87. In honor of his achievements a host of events will soon be taking place as part of a national celebration called Will Eisner Week. It’s cool that our March 2 panel will be among them.