Harlan Ellison Gets In "The Spirit" (Comic Book Resources)

Though he’s well known enough by genre fans in general for his body of prose and film work, writer Harlan Ellison is also one of the best known, most connected voices in the comic book community. As a fan, collector, commentator and occasional script writer, Ellison has made his mark on comics throughout his career, and one of the writer’s strongest and longest comic connections has been to Will Eisner and his singular crimefighter, The Spirit. Over his years of friendship with the iconic cartoonist, Ellison learned the ins and outs of the cemetery-bound hero Denny Colt, even attempting to get the Spirit onto the silver screen. But it wasn’t until this week that the writer was able to have a Spirit story of his own see the light of day with an 10-page black and white story in DC Comics “The Spirit” #2 as drawn by Kyle Baker. 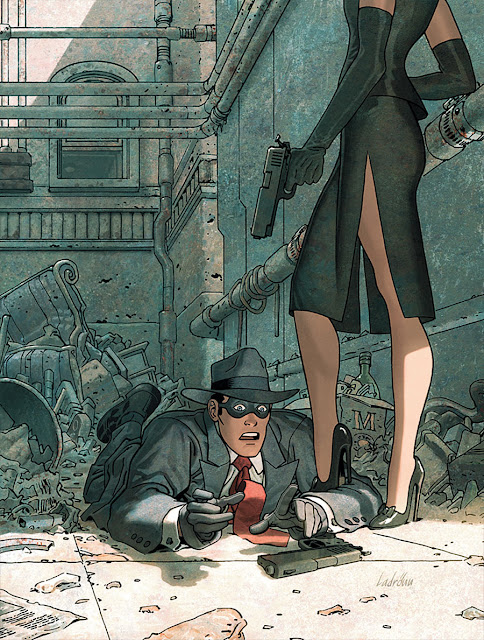 “My personal connection to the Spirit is that, when I was a very little boy – maybe six or seven years old and we lived in Ohio – my mother and I used to go to The Breakers Hotel at Cedar Point,” Ellison explained to CBR News, recounting the twists and turns that led to the new DC story. During the writer’s youth in the 1940s, that luxury hotel was a crossroads for working class families like the Ellisons to live it up on an affordable budget (or as Ellison put it, a place for “people who wanted to act and think and behave the way those that had money did”). But for the young writer-to-be, The Breakers was less an outlet for beach-hopping and the amusement park Ferris Wheel and more a perfect kid’s reading room. “I would get my funnies and lie there in the middle of the carpet – right in the middle of all these people dragging in suitcases and checking in and out and carrying dripping beach umbrellas. I was nothing but a clog in the aorta of that hotel, but they liked me. I was a jittery, jumpy kid, and they liked me. I would lie there, and I saw my first Spirit Section [a newspaper insert in the Chicago Sun], and I thought I would just lose my mind. I had never seen anything like that. For all the comics I owned and all the comics I’d ever seen, there was nothing like Will Eisner. He just exploded off the page.

“And as the years went by, I collected all the original Spirit stuff. I got all the comics and books, and then I met Will. I don’t remember where I met him, but we became good fast friends. We would hang out. We’d go up to visit Mike Richardson in Oregon and hang out at Mike’s house. Will Eisner was the great, funny uncle that I didn’t actually have.”