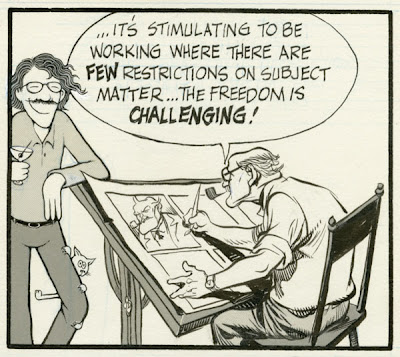 “Among the 100,000-plus at last week’s San Diego Comic-Con, the place was plentiful with designers – Chip Kidd being the most famous – participating in panels and signings. But there were even more than was first obvious … it’s just that they were all called “comic book artists.” And below, you’ll hear a few of these creators discuss how and why their visual narratives are, in fact, graphic design.

“First, a bit about the actual event. It’s been widely noted that in recent years, the “Comic” of the title is increasingly becoming a “Con”… or at least an outmoded brand name. Genre movie and TV promotions that continue to elbow visual literature out towards the peripheries … check. Deep sighs from those of us who recall the 1970s at the El Cortez Hotel, when the convention was, in fact, all about comics, and the superstar speakers were readily available … check. Decision about returning again next year … hmm.”