Share
Tweet
+1
Share
Pin
0 Shares
By the time Will Eisner had finished the Continuity for PS 128 (July 1963), he had used the artifice of a dream sequence to flash a cameo parade of 17 comics characters in the eight pages involved.
They are: Pogo and Owl (shown below with Connie Rodd), plus Superman, Mandrake the Magician, Dick Tracy with Junior and Tess Truehart, Daisy Mae, Li’l Abner, Maggie, Jiggs, Donald Duck, Popeye, Dagwood, Blondie, Mutt, and Jeff—all included in this fifth posting to our ongoing, year-long blog salute to the U.S. Army’s acclaimed “PS Magazine” during its Sixtieth Anniversary Year .

Because of Will’s relationship with the artists who created those wonderful newspaper stirps, he felt absolutely comfortable in using them for this purpose. I think it also reflects Will’s belief that these characters add interest and generate the powerful effectiveness to communicate ideas, which was what Will was all about. He had great respect for his fellow “workers in the mines” of ideas.

¶  The One Piece of Art that Delivers the Essence of “PS:

¶  Will Eisner Self-Portraits in “PS” 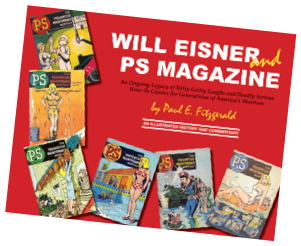