FOR IMMEDIATE RELEASE—
FROM: Joe Kubert and Paul E. Fitzgerald
BlogPost 12 – Apeldoorn Sparks Buzz re Eisner Self-Portraits
LINK: http://thebestofpsmagazine1951-2011.blogspot.com/
Our ongoing, year-long salute to the U.S. Army’s famous “PS Magazine” during its Sixtieth Anniversary Year continues with a twelfth BlogPost sparked by a comment from Ger Apeldoorn, a Dutch comics maven, speculating about a possible origin of Eisner’s story-line for the PS Continuity that contained a series of Eisner self-caricatures.
It provided an opportunity to present another Eisner self-portrait as it appeared in a two-color Memorial in PS Magazine two months after his death in 2005. Also displayed, for the first time, is the same piece in its original full-color.
UPCOMING BLOG POSTS—
¶ The Magic of Eisenshpritz in PS
¶ Early Covers Put Eisner, PS in Hot Water
¶ The Best of Zeke Zekely in PS
¶ A Covey of Connie Covers
¶ Perspective Instructional Communications’ Best in PS 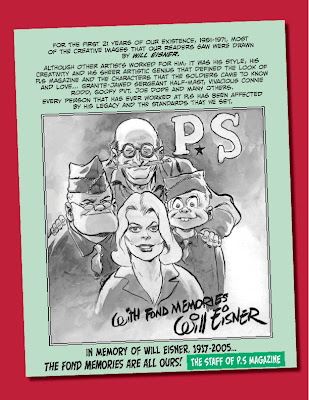