BlogPost 14 – Warriors and Weather: Part B

We continue our ongoing, year-long salute to the U.S. Army’s famous “PS Magazine” during its Sixtieth Anniversary Year with additional selections depicting the varied woes and worries associated with Warriors and Weather.

In commenting about following in Will Eisner’s creative footsteps at PS, Joe Kubert says in this post: “It takes someone who KNOWS it—and FELT it—to be able to create a drawing to SHOW it!”

In our next two BlogPosts, Parts C and D, in our four-segment display of weather challenges, we will add selections from the pen of Murphy Anderson, including the Front Cover with his mythic “Winter Hawk”—which was selected by the New Millennium PS staff as one of Murphy’s best!

Will’s soft, sentimental holiday scene, below, is part of this fourteenth presentation.

¶ A Covey of Connie Covers 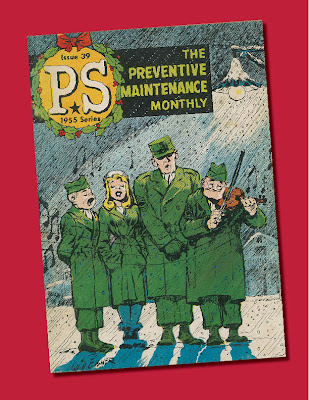