FOR IMMEDIATE RELEASE—
FROM: Joe Kubert and Paul E. Fitzgerald
BlogPost 15 – Warriors and Weather: Part C
LINK: http://thebestofpsmagazine1951-2011.blogspot.com/
This fifteenth BlogPost in our ongoing, year-long salute to the U.S. Army’s internationally acclaimed “PS Magazine” during its Sixtieth Anniversary Year is the third in a four-part subset, “Warriors and Weather,” highlighting the PS success in realistically reflecting the challenges and complications heaped on military tasks and operations by weather and seasons. We reached into the wonderful well of PS work from the pen of Murphy Anderson to present another facet to those provided by Joe Kubert and Will Eisner.
It has been estimated that Murphy had a hand in (or at least was in the neighborhood of) the production of a stretch of more than 200 issues of PS.
In the following Part D—the final chapter in this weather, woes, and worries mini-series—we’ll include a healthy batch of interior, two-color spreads reflecting cross-gutter and wall-to-wall bleeds that truly push the small-format envelope.
“The Winter Hawk,” below, by Anderson, was picked by the PS staff as one of his four best Front Covers for PS.
UPCOMING BLOG POSTS—
¶ Warriors and Weather: Part D
¶ Early Covers Put Eisner, PS in Hot Water
¶ The Best of Zeke Zekely in PS
¶ A Covey of Connie Covers
¶ Perspective Instructional Communications’ Best in PS 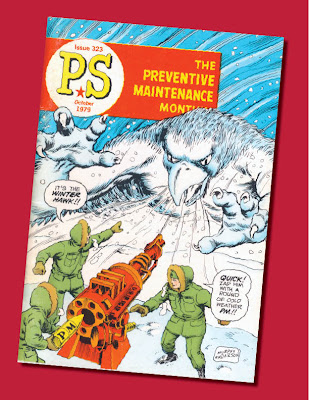