FOR IMMEDIATE RELEASE—
FROM: Joe Kubert and Paul E. Fitzgerald
BlogPost 18 – PS and 4th Armored Division 1963 Event
LINK: http://thebestofpsmagazine1951-2011.blogspot.com/
PS 703 (June 2011), the Sixtieth Anniversary Edition of the U.S. Army’s internationally acclaimed, ground-breaking and pace-setting leader in communicating motivational and technical information, is off the presses and on the streets.

Joe Kubert has done a magnificent job. He pulled out all the stops, used every tool in the shed, and did himself, as well as all the other PS artists who preceded him, proud.

This nineteenth BlogPost in our ongoing, year-long salute to PS during its Sixtieth Anniversary Year, features an extensive array of spreads from this milestone issue
The image below displays Joe’s wraparound covers for it.
—p.e.f.
UPCOMING POSTINGS:
¶ A Covey of Connies: World War II to Today
¶ Eisner Saluted Gunsmoke in PS
¶ PS Sixtieth Anniversary Celebration
¶ Best of Zeke Zekely in PS
¶ PS Characters in Animation 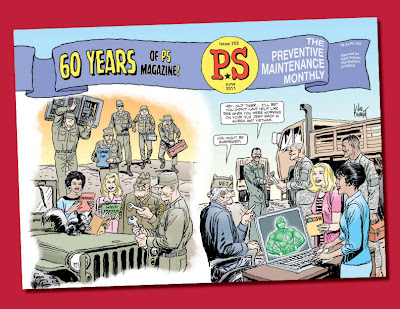