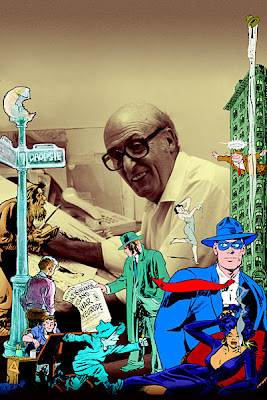 NEW YORK (July 18, 2011) – The Museum of Comic and Cartoon Art – MoCCA – is proud to announce a special MoCCA THURSDAYS event: Will Eisner’s Evolution: From The Spirit to A Contract with God and Beyond, featuring Eisner experts DENNY O’NEIL, DAVID HAJDU, and N.C. CHRISTOPER COUCH and moderated by DANNY FINGEROTH.

The panel is being held in conjunction with the Will Eisner’s New York and In the Spirit of Will Eisner exhibitions, which have been host to record-breaking MoCCA attendance.

Here are the details:

Will Eisner’s Evolution: From The Spirit to A Contract with God and Beyond…
Why and how did the guy who invented and conquered entertainment comics, then spent 25 successful years creating educational comics, reinvent himself, the medium of sequential art, and the comics industry itself through his innovation in the literary and autobiographical graphic novel and his endless advocacy for comics as an art form? Panelists: Denny O’Neil, David Hajdu, and N.C. Christopher Couch. Moderator: Danny Fingeroth.

DENNY O’NEIL, one of comics’ most acclaimed writers, worked briefly in journalism, then moved to New York and comics. Denny brought social consciousness to the medium with the groundbreaking Green Lantern/Green Arrow series. His work on Batman- as writer and editor-returned that character to its dark, gothic roots. Denny knew Will Eisner and considered him both a friend and a major influence.

DAVID HAJDU is a critic for The New Republic and a professor at the Columbia University Graduate School of Journalism. He interviewed Will Eisner extensively and wrote about him at length for The New York Review of Books and other publications. He is the author of four books: Lush Life: A Biography of Billy Strayhorn, Positively 4th Street: The Lives and Times of Joan Baez, Bob Dylan, Mimi Baez Fariña and Richard Fariña, The Ten-Cent Plague: The Great Comic Book Scare and How It Changed America, and Heroes and Villains: Essays on Music, Movies, Comics, and Culture. His articles and essays have been selected for a number of anthologies, including Best Music Writing, Best American Magazine Writing, The New York Times Arts & Culture Reader, and Best American Comics Writing.

N. C. CHRISTOPHER COUCH holds a Ph.D. in art history from Columbia University. He is the author of numerous books and articles on Latin American art and on graphic novels and comic art, including The Will Eisner Companion: The Pioneering Spirit of the Father of the Graphic Novel (with Stephen Weiner), Will Eisner: A Retrospective (with Peter Myer), Faces of Eternity: Masks of the Pre-Columbian Americas, and The Festival Cycle of the Aztec Codex Borbonicus. He teaches comics as art and literature at University of Massachusetts, Amherst, the School of Visual Arts, New York, and Trinity College, Hartford. He has curated exhibitions at the American Museum of Natural History, the Americas Society, the Oklahoma Air and Space Museum and the Smith College Museum of Art. His most recent book, Jerry Robinson, Ambassador of Comics (Abrams 2010) has been nominated for a Harvey Award.

DANNY FINGEROTH is MoCCA’s Sr VP of Education and co-curator, with Denis Kitchen, of the Will Eisner’s New York and In The Spirit of Will Eisner exhibitions. With Arie Kaplan, he co-curated the 2010 Is This the Al Jaffee Art Exhibit? at the museum. For Write Now! magazine, Fingeroth interviewed Will Eisner in depth in 2003. The interview is available in The Best of Write Now! Danny Fingeroth was a longtime editor and writer at Marvel Comics, and is the author of Superman on the Couch: What Superheroes Really Tell us About Ourselves and Society; Disguised as Clark Kent: Jews, Comic, and the Creation of the Superhero; and The Rough Guide to Graphic Novels. He has spoken on comics at The Smithsonian Institution, Columbia University (where he lectured about Eisner), and the Metropolitan Museum of Art. With Roy Thomas, Fingeroth is co-editor of The Stan Lee Universe, a compendium of rarities from Lee’s career, including unseen Will Eisner material, which will be released in fall 2011 by TwoMorrows Publishing. You can contact him at: dfingeroth@moccany.org.

About the Will Eisner’s New York: From The Spirit to the Modern Graphic Novel exhibition:

From the Golden Age of Comics through the creation of the modern graphic novel (a form he was instrumental in popularizing), you will find New York City at the heart of Will Eisner’s work. Whether thinly disguised as “Central City” in the pages of his legendary creation, The Spirit, or more directly presented in his autobiographical graphic novels, New York was portrayed by Eisner as only a native of the city could know it.

About the In the Spirit of Will Eisner: Creators influenced by the Legendary Cartoonist exhibition:

The art  ranges from a Cardy piece done in the 1940s for Eisner’s studio, to classic underground comix work by Spiegelman, to a new Spirit illustration done by Feiffer especially for this show.

This once-in-a-lifetime combination of artists’ work is a perfect complement to Will Eisner’s New York, and is another reason these exhibitions are must-sees for anyone interested in comics and graphic novels.

Exhibitions curated by Denis Kitchen and Danny Fingeroth and sponsored by The Will and Ann Eisner Family Foundation.

About WILL EISNER:
Born in 1917, Will Eisner was raised in the tenement Bronx of the Great Depression. He was a pioneer in the creation of comics of the “golden age” of the 1930s and ’40s, achieving immortality with his noir crime fighting superhero, THE SPIRIT, the first character to star in a comics insert distributed in newspapers. At one time or another, just about every comics great of his own and succeeding generations worked with and for Eisner, including Jules Feiffer, Wallace Wood, Jack Kirby, Al Jaffee, and Mike Ploog. When The Spirit ceased publication in 1952, Eisner devoted himself to producing educational and instructional comics. Then, in 1978, Eisner reinvented himself-and the medium-with his graphic novel A Contract with God, the first of a series of works focused, for the most part-with a compassionate yet unsentimental lens-on early 20th century Jewish life in America. Other notable graphic novels included To The Heart of the Storm, A Life Force, and The Name of the Game. At the time of his 2005 death, Eisner was working on The Plot, a comics-form refutation of the resurgent Protocols of the Elders of Zion, which was released posthumously.

The Museum of Comic and Cartoon Art – MoCCA is a 501(c)(3) nonprofit arts education organization dedicated to the preservation, study and display of all forms of comic and cartoon art.  The museum promotes greater understanding and appreciation of the artistic, cultural and historical significance of comic and cartoon art through a variety of events, exhibitions, and educational programs.   The museum is located at 594 Broadway (between Houston and Prince Streets) in New York City.  MoCCA is open to the public Tuesdays through Sundays from 12:00-5:00 pm.  Suggested donation to the museum is $5 but free for MoCCA Members as well as for children 12 and under (when accompanied by a paying adult).  For more information about the museum and MoCCA events, exhibitions and programs, contact MoCCA President and Chairman Ellen S. Abramowitz at eabramowitz@moccany.org.

WHAT:      MoCCA Thursday: Will Eisner’s Evolution: From The Spirit to A Contract With God and Beyond…

A Contract With God, Danny Fingeroth, Museum of Comic and Cartoon Art, The Spirit, Will Eisner