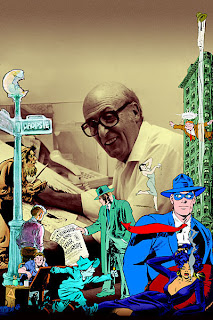 Comic-Con International (Comic-Con) is proud to announce that the judging panel has been named for the 2012 Will Eisner Comic Industry Awards. This blue-ribbon committee will select the nominations to appear on the Eisner Awards ballot. This year’s judges are:

Brigid Alverson, comics journalist and reviewer. After earning an MFA in printmaking, Brigid worked as a book editor and later as a newspaper reporter. She started MangaBlog to keep track of her daughters’ reading habits and now covers comics and graphic novels as a freelancer for School Library Journal, Publishers Weekly Comics Week, Graphic Novel Reporter, Comic Book Resources, MTV Geek, and Robot 6. She also edits the Good Comics for Kids blog at School Library Journal.

Calum Johnston, the owner of Strange Adventures: Comix & Curiosities, in Nova Scotia. Originally from Montreal, Calum began selling comics at a farmer’s market while attending school and working as a waiter, DJ, and newspaper production manager, among other things. He started Strange Adventures in Halifax in 1992; he has recently added a third location. Johnston describes owning a comic book store as “The best job in the world for someone who likes to share the joy of fine comic books!” He is a member of ComicsPro, and Strange Adventures has won several retailer awards including the Eisner and the Shuster. It was named best Canadian comics store in Previews magazine, Canada’s Readers Digest, and The Coast newspaper readers poll.

Jesse Karp, school librarian at LREI, an independent school in New York City. He teaches the graduate course Graphic Novel: Narrative and Sequence at Pratt Institute, and he served three years on the American Library Association’s Great Graphic Novels for Teens Committee. He is a graphic novel reviewer for Booklist magazine and is the author of Graphic Novels in your School Library (ALA, 2011) and the YA novel Those That Wake (Harcourt Children’s Books, 2011).

Larry Marder, comics industry veteran. On the creative side of the comic book field, his Beanworld series has delighted readers from grade school to grad school for more than a generation, earning him a spot on the New York Times Graphic Books Best Sellers List. On the business side, Larry has been executive director of Image Comics, president of McFarlane Toys, and marketing director of Moondgog’s, a chain of Chicagoland comic book stores. He currently serves as president of the board of the Comic Book Legal Defense Fund.

Ben Saunders, professor of English at the University of Oregon. He was originally hired to teach the plays of Shakespeare, but since receiving tenure in 2006 he has also worked steadily to establish that institution at the forefront of Comics Studies. Besides serving as curator for the Jordan Schnitzer Museum of Art’s comprehensive exhibition of original comic art from the superhero genre (“Faster Than A Speeding Bullet,” 2009), Ben is author of Do The Gods Wear Capes?: Spirituality, Fantasy, and Superheroes (Continuum Press, 2011) and a founder of the University of Oregon undergraduate minor in Comics and Cartoon Studies. Within that interdisciplinary program, he teaches classes that draw on the wider history of the Anglo-American comics tradition, from newspaper strips to comic books to graphic novels.

Mary Sturhann, secretary on the Board of Directors of Comic-Con International since 1994. Mary started attending conventions 31 years ago. She is an avid reader of books, comics, graphic novels, and manga. She collects old movies and enjoys gaming of all kinds, but leans toward board and card games. She attends and works as staff at several conventions, including Comic-Con International and WonderCon, and is the recipient of an Inkpot Award.

Bob Andelman is the author or co-author of 12 books, including Mind Over Business with Ken Baum, The Consulate with Thomas R. Stutler, The Profiler with Pat Brown, Built From Scratch with the founders of The Home Depot, The Profit Zone with Adrian Slywotzky, Mean Business with Albert J. Dunlap, and Will Eisner: A Spirited Life. Click here to see Bob Andelman’s Amazon Central author page. He is a member in good standing of the American Society of Journalists and Authors (member page).