The Plot by Will Eisner 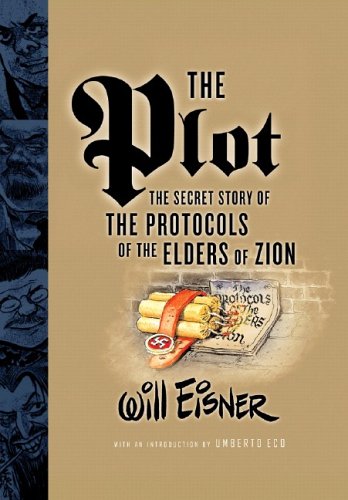 Order ‘The Plot: The Secret Story of The Protocols of the Elders of Zion’ by Will Eisner, available from Amazon.com by clicking on the book cover above!

MAITLAND — Until his death on Jan. 3, 2005, William Erwin “Will” Eisner was one of the nation’s most respected comics writer and artists, who gave us The Spirit character and comic book, and the man who was considered to have played a leading role in establishing the graphic novel as a form of literature through his “A Contract with God and Other Tenement Stories.”

It’s no surprise the comics community pays lasting tribute to Eisner’s work through the Will Eisner Comic Industry Awards, or “Eisners”, to recognize yearly achievements in the comics medium.

What may be less known is something else Eisner created: the graphic illustrations that make up “The Plot,” an entirely different way of using the medium than what The Spirit offered in his fantastical crime fighting adventures.

“The Plot” is now a special traveling exhibit being made possible through the Will Eisner Estate and the Anti-Defamation League, which was founded in 1913 to stop the defamation of the Jewish people.

“The Plot” looks back at a dark and often terrifying chapter of world history, one that starts with the Secret Police in Russia, and goes right on up to Hitler’s rise in Germany, and his campaign of annihilation against the Jews — and beyond to modern day.