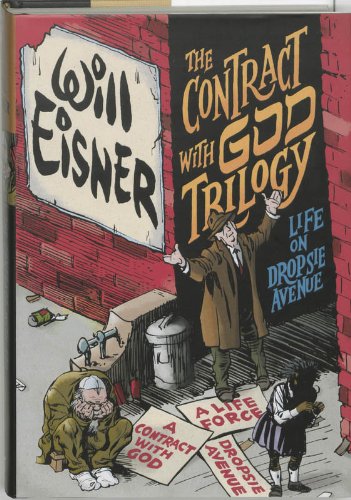 Order ‘The Contract with God Trilogy: Life on Dropsie Avenue (A Contract With God, A Life Force, Dropsie Avenue)’ by Will Eisner, available from Amazon.com by clicking on the book cover above!

I really like Comic books. I mean REALLY like comic books. Because of my lack of finances I go to the library for all of my media but that being said, I am reading at least 3 comic books a week. Everything from superhero comics to illustrated memoirs. Everyone from Jack Kirby to Mike Mignola. I love the art, I love the stories, and I love that I can read something like “Infinite Crisis” in one afternoon!

*I should point out here that if NONE of these things made sense I highly encourage a little interwebs perusing in the near future to check out all of the name drops because you will be dragged into a world that is so cool and mesmerizing you are gonna be like WTF?!?!?! THIS IS SO FLIPPIN’ AWESOME!

My ventures into the comic world was really casual at the beginning when I was kid, I bought marvel comics that looked cool and read DC occasionally and other indie comics but never really thought anything about them other than they were cool. As I grew older though and started to read more Graphic Novels, I started to really develop an almost academic appreciation for the comic medium. I started to really look at the history of comic books, their developments, and creators. Now each of these could be their own lectures in a college setting for sure but we can save that for another time. Right now I wanted to be able to tell you about one of the best Graphic novels of all time which just so happens to be the FIRST graphic novel ever, Will Eisner’s A Contract with God.