A Life Force, Will Eisner, GeekDad.com 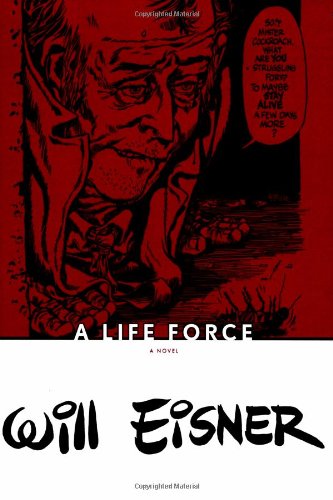 Order ‘A Life Force’ (Will Eisner Library), available right now at a great price by clicking on the book cover above!

In last week’s column I talked about autobiographical (and semi-autobiographical) comics. This week, I’d like to take a step back and focus on one artist in particular whose books are fiction but have bits and pieces of his own life in them: Will Eisner. Eisner is often called the father of the graphic novel: he popularized the term itself, but was also a pioneer in the medium—and the most prestigious American comics award is named after him.

I’d read some of The Spirit several years ago, but these stood out to me mostly as groundbreaking in the way Eisner used the medium but not so much in the dialogue, which seemed a bit corny to me and not terribly different from a lot of other comics I’ve read. What makes them stand out is that the style of storytelling is ahead of its time, and perhaps the reason it feels familiar is because so many comics artists since have been influenced by Eisner’s work.

Last year I finally read one of Eisner’s more literary works, his graphic novels set on Dropsie Avenue in the Bronx. I checked out the Contract With God Trilogy, which collects three of his books: A Contract With God, A Life Force, and Dropsie Avenue: The Neighborhood. I spent the course of a few days poring over it, and it’s a masterpiece, well worth reading.

Note to parents: Eisner doesn’t shy away from showing the seedier side of life on Dropsie Avenue. There are uplifting moments, but there’s also corruption, organized crime, murder, adultery and rape, and general unpleasantness.