The Spirit splash page by Will Eisner 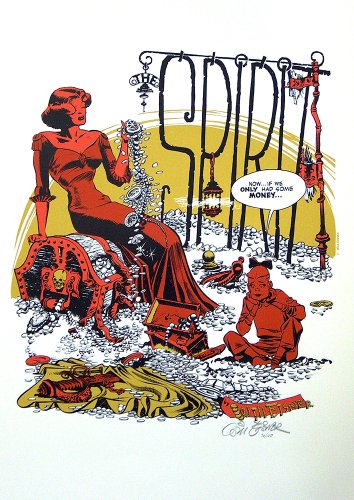 The Spirit splash page by Will Eisner: A very limited signed and numbered silkscreen from an edition of just 150 copies. This depicts one of the most famous Spirit splash pages, a masterpiece of design, printed in beautiful shades of ochre. Silkscreen printed in rich deep colours on beautiful paper stock. A classic Spirit image and a rare opportunity to obtain a signed print by the master of comic strip storytelling. Click on the image to order!

Nine years after Will Eisner’s death, comics’ biggest names remain in awe of the legendary creator’s talent. And one of them is still in awe — in a negative way — of Frank Miller’s cinematic homage to the late creator.

“Is there anyone in this room who actually liked the ‘Spirit’ movie?” veteran writer Peter David asked the audience attending Emerald City Comicon’s “Why Eisner Matters” panel. Seeing no hands raised, David continued. “Okay, so we’re all on the same page.”

Miller’s 2008 action movie is widely seen as a star-studded misfire, a bizarre take on Eisner’s classic urban-vigilante comic strip that ran from 1940 to 1952. But even a poorly-received movie based on his most famous creation was unable to tarnish Eisner’s legacy as a grandmaster of American comics, whether as a creator, a publisher, a teacher, an advocate or a visual artist.

David came together with writer Matt Fraction and artists Jeff Smith and Michael Avon Oeming to honor their forebear, quickly spinning off into personal anecdotes of encounters with Eisner — or simply with his work — which changed their careers, sending them on new, rewarding trajectories.