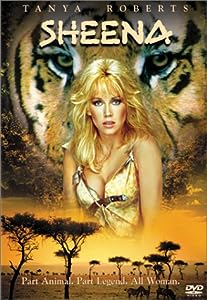 …or, A Very Pointed Commentary on the Politics of Sub-Saharan Africa. With Nudity.

Since the early days of cinema, one of the easiest methods of “skirting” the taboo subject of nudity on film was accomplished by finding excuses to have characters in loincloths. First beginning popularly with the Edgar Rice Burroughs’ Tarzan series – though there are, of course, earlier examples, the “noble savage” of literature became a heroic archetype, often set against the backdrop of evil imperialism and modern civilization. Unsurprisingly, not long after publication of Tarzan of the Apes in 1914, films debuted featuring this character, complete with the stereotypical loincloth, heralding a genre that would continue to this day, for the most part.

While Tarzan was the original savage Caucasian, there were rival characters, most interestingly the female Sheena, Queen of the Jungle. Introduced by Will Eisner – creator of The Spirit – and Jerry Iger (collectively as “W. Morgan Thomas”). Sheena debuted in the pages of the British magazine Wags in 1937. Eventually, the character would prove popular enough to garner her own book, Sheena, Queen of the Jungle, in 1942. In the mid-50s, Sheena was adapted into a syndicated television series starring Irish McCalla, who became an early sex symbol of the medium.