Today’s influential artist is Will Eisner! 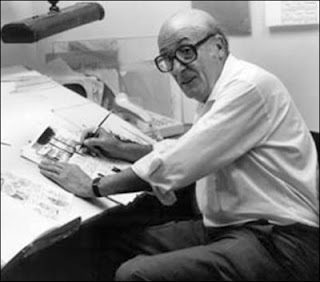 Why Is He Influential?

When Will Eisner started working on The Spirit in 1940, he was already breaking new ground. His work, rough-hewn though it was, as rooted in a realistic style, already showed the inventiveness and innovation that he would come to be known for. In an industry – and at the time, in a world – where the only thing in high demand was the superhero, Eisner was tasked to come up with one. Not wanting one, he drew a mask and gloves on the detective he was working on, named Denny Colt, and the Spirit was born! Although ostensibly a superhero, Denny Colt was really a detective, a crimebuster, and, as was atypical of superheroes then, all too human.

After Eisner had his studio artists (a list which included Jack Kirby, Joe Kubert, Jules Feiffer, and most importantly for this article, Lou Fine and Jack Cole) ghost the strip for a few years while he was off serving his country during World War II, he came back and truly cut loose. Gone was the realistic style in which the art was rooted; instead Eisner used a cartoony style, more emotive and more suggestive of gestures and emotions. (It wasn’t until Neal Adams came along, I think, that artists really knew how to merge a realistic style with the advantages of the cartoony style.)