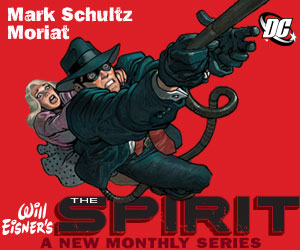 EXCERPT: Dan DiDio offered that he’d wanted to feature Doc Savage and other pulp heroes like The Spirit in a shared universe as far back as 2003. “It’s been a long time in the making and what pulled it all together was Brian Azzarello’s excitement and passion,” said DiDio.

Azzarello said, “The goal of ‘First Wave’ is to introduce those characters to a new audience. That’s it first and foremost. Doc Savage has been around for longer than I have but in comics, not really. He is the Rosetta Stone for everything that you like. Fortress of Solitude, that was in his book first.

“And it’s been cool to work on The Spirit too. I’ve really enjoyed that character a lot. It was gratifying meeting with Will Eisner’s family. I said, ‘This is what I want to do with this character. Take him in a little bit of a different direction.’ And they were very, very supportive of that. That means we’re on the right track. Something that Eisner said was, ‘I don’t want anybody writing a Will Eisner story.’ And I’m not.

“And then we’ve got Batman and he’s got some guns.”