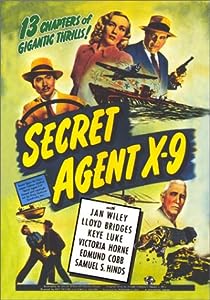 I was prepared to unload a couple of barrels of snark on “The Mammoth Book of Best Crime Comics” (Running Press, $17.95), but was pleasantly surprised.

“Best” includes a lengthy “Secret Agent X-9” comic-strip sequence from 1934 that’s much better than the hokey name would lead you to believe, because it’s written by Dashiell Hammett (“The Maltese Falcon”) and drawn by Alex Raymond (“Flash Gordon”). Others gems include stories starring modern gumshoes El Borbah, Mike Hammer and Ms. Tree, or written by Alan Moore and Neil Gaiman. Gravett somehow includes a 1951 EC Comics story by Johnny Craig and a 1946 “Spirit” episode by Will Eisner, whose rights are very much locked up.

As must be obvious by now, Gravett’s book lives up to its name in another way, in that it truly is mammoth. “Best” clocks in at more than 470 pages — all of it black-and-white, but with crime comics that’s actually a plus.