Will Eisner’s New York: From The Spirit to the Modern Graphic Novel (MoCCA) 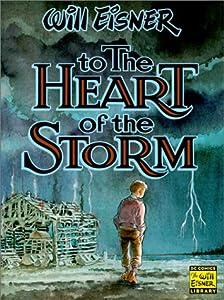 Cover via AmazonThe Museum of Comic and Cartoon Art (MoCCA) is pleased to announce it’s latest exhibition:Will Eisner’s New York: From The Spirit to the Modern Graphic Novel Opening March 1, 2011.

The Museum of Comic and Cartoon Art – MoCCA – is proud to announce Will Eisner’s New York: From the Spirit to the Modern Graphic Novel, an exhibit showcasing work of the comics and graphic novel master that was inspired by, and which spotlighted, his hometown, the city he always held closest to his heart: New York. The exhibition will run from March 1st-June 30, 2011. It is curated by Denis Kitchen and Danny Fingeroth.

From the Golden Age of Comics through the creation of the modern graphic novel (a form he was instrumental in popularizing), you will find New York City at the heart of Will Eisner’s work. Whether thinly disguised as “Central City” in the pages of his legendary creation, The Spirit, or more directly presented in his autobiographical graphic novels, New York was portrayed by Eisner as only a native of the city could know it.

This exhibition spotlights the city as reflected in all eras of Eisner’s work. It includes Spirit artwork, art from many of his classic graphic novels, including A Contract with God and To the Heart of the Storm, and original paintings by Eisner, as well as art by significant creators who were influenced by him, including Peter Kuper, Art Spiegelman, and Harvey Kurtzman.

Historical context for the over 100 pieces in the exhibit will be provided by wall text by the curators, as well as by a continually running slide show that traces the evolution of Eisner’s work. Also
on continuous view will be Jon and Andrew Cooke’s award-winning 2007 documentary, Will Eisner: Portrait of a Sequential Artist.

ABOUT WILL EISNER:
Born in 1917, Will Eisner was raised in the tenement Bronx of the Great Depression. He was a pioneer in the creation of comics of the “golden age” of the 1930s and ’40s, achieving immortality with his
noir crime fighting superhero, THE SPIRIT, the first character to star in a comics insert distributed in newspapers. At one time or another, just about every comics great of his own and succeeding generations worked with and for Eisner, including JULES FEIFFER, WALLACE WOOD, JACK KIRBY, AL JAFFEE, and MIKE PLOOG. When the Spirit ceased publication in 1952, Eisner devoted himself to producing educational and instructional comics. Then, in 1978, Eisner reinvented himself—and the medium—with his graphic novel A CONTRACT WITH GOD, the first of a series of works focused, for the most part—with a compassionate yet unsentimental lens—on early 20th century Jewish life in America. Other notable graphic novels included To The Heart of the Storm, A Life Force, and The Name of the Game. At the time of his 2005 death, Eisner was working on THE PLOT, a comics-form refutation of the resurgent Protocols of the Elders of Zion, which was released posthumously.

ABOUT THE CURATORS:
DENIS KITCHEN: As one of the original underground cartoonists, he founded Kitchen Sink Press in 1969 and for thirty years published the work of numerous leading artists, including Will Eisner. In 1986 he founded and for eighteen years oversaw the Comic Book Legal Defense Fund, the non-profit dedicated to defending First Amendment rights. After the demise of Kitchen Sink in 1999, he became a partner in Kitchen & Hansen Agency, then Kitchen, Lind & Associates, each representing prominent comics creators. His Denis Kitchen Art Agency handles original art sales for clients including the Eisner estate. As a writer and comics historian he has produced numerous books, including the award-winning Art of Harvey Kurtzman and Underground Classics for Abrams/ComicArts. Coming full circle as an artist, Dark Horse recently published The Oddly Compelling Art of Denis Kitchen and his Chipboard Sketchbook is just out from Boom Town.

DANNY FINGEROTH is MoCCA’s Sr. VP for Education. He was a longtime editor and writer for Marvel Comics. Fingeroth has written books about comics including Disguised as Clark Kent: Jews, Comics and the Creation of the Superhero (Continuum) and The Rough Guide to Graphic
Novels (DK Publishing). For his TwoMorrows-published Write Now magazine, Fingeroth interviewed Will Eisner, in depth, in 2003. The interview has been reprinted in The Best of Write Now. Fingeroth has spoken about Eisner and his career at Columbia University and other venues. His upcoming book, The Stan Lee Universe, co-edited with Roy Thomas, will be published by TwoMorrows later in 2011. Danny’s MoCCA course, “How to Write Comics and Graphic Novels,” starts May 2nd,
and he will be teaching comics writing this June in Milan, Italy, at the MiMaster Open Workshop.

The Museum of Comic and Cartoon Art – MoCCA is a 501(c)(3) nonprofit arts education organization dedicated to the preservation, study and display of all forms of comic and cartoon art. The museum promotes greater understanding and appreciation of the artistic, cultural and historical significance of comic and cartoon art through a variety of events, exhibitions, and educational programs.

Suggested donation to the museum is $5 but free for MoCCA Members as well as for children 12 and under (when accompanied by a paying adult).