Pitching a changeup in the eighth blogpost for our ongoing, year-long salute to “PS Magazine” in its Sixtieth Anniversary Year, we offer the “PS” staff’s selection of the four best Front Covers produced by Murphy Anderson. Murphy was involved with production of the magazine for nearly 14 years: as a stalwart in Will Eisner’s shop, as a member of the “Eisner Alumni Group,” and as the”PS” art and production contractor.

A lagniappe offering is included, displaying a 1907 Fisk Tire Company ad illustration with a “PS” Front Cover riff by Murphy that drew flak for both him and the magazine staff from Army Brass.

¶ The Magic of Eisenshpritz in “PS” 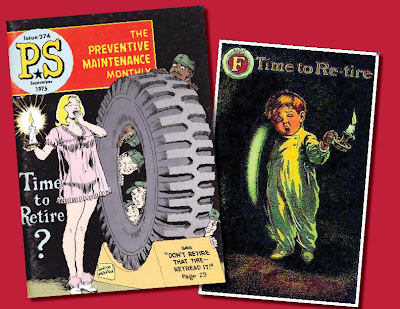