Immediately following Will Eisner’s departure at the end of his 21-year gig as “PS Magazine’s” art contractor, this group from Will’s shop successfully bid the contract for PS creative art and pre-press production. It included Dan Zolnerowich, Mike Ploog, Chuck Kramer, Bob Sprinsky, and Ted Cabarga. Nearly all of them were competent, recognized artists whose direction and style had just been released from Will’s parameters. This blogpost includes, as their “best,” a Front Cover with George Washington at Valley Forge and a sci-fi human miniaturization cautionary tale about F.O.D.—Foreign Object Damage in Aircraft.

Other than some of the PS characters’ characteristics, I tend to deviate from Will’s style, although I’ve been an admirer since the ‘Spirit’ days. And things change. If we (my team and I) were to attempt to include some female poses (similar to the double-page poster on the Joe’s Dope Sheet spread included this blogpost), we’d be arrested, but only after being drawn and quartered.

¶ Will Eisner Self-Portraits in PS

¶ The Magic of Eisenshpritz in PS 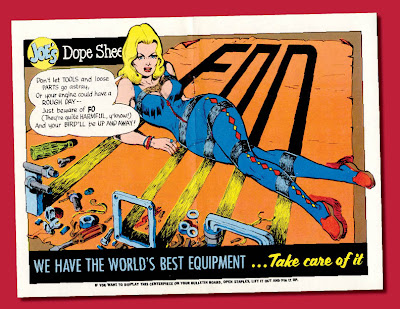