FOR IMMEDIATE RELEASE—
FROM: Joe Kubert and Paul E. Fitzgerald
LINK: http://thebestofpsmagazine1951-2011.blogspot.com/
We’ve packed 15 images and nearly 1,100 words into this sixteenth BlogPost in our ongoing, year-long salute to the U.S. Army’s internationally acclaimed “PS Magazine” during its Sixtieth Anniversary Year. This is the fourth and final segment in a subset, “Warriors and Weather,” focused on PS techniques for conveying the complications and challenges of weather and climate for military duties and operations.
Images by Will Eisner, Joe Kubert, and Murphy Anderson are featured, along with a fulsome discussion of the evolution of a duotone, kick-the-sides-out-of-the-box design concept for PS interior pages.
The spread below shows Pages 4-5 from Murphy Anderson’s PS 323 (October 1979).
UPCOMING BLOG POSTS—
¶ Early Covers Put Eisner, PS in Hot Water
¶ The Best of Zeke Zekely in PS
¶ A Covey of Connie Covers
¶ Perspective Instructional Communications’ Best in PS 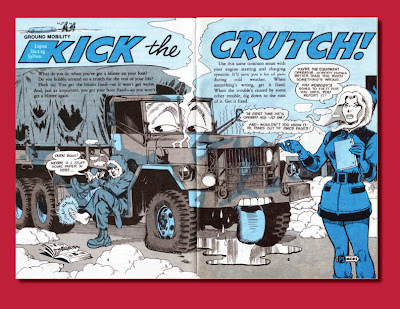