Last Day in Vietnam by Will Eisner 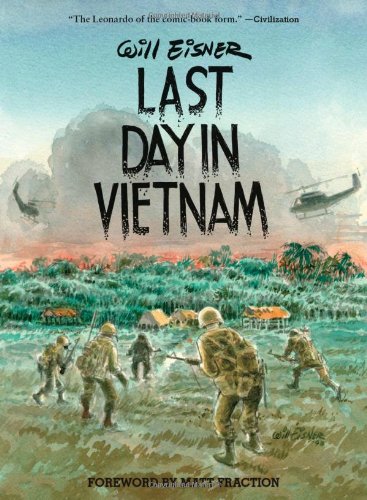 Order ‘Last Day in Vietnam: A Memory’ by Will Eisner, available from Amazon.com by clicking on the book cover above!

[amazon_link id=”1616551208″ target=”_blank” container=”” container_class=”” ][/amazon_link]Will Eisner is the man who literally wrote the book on creating comics. His Comics and Sequential Art has influenced comic creators since its original publication in 1985 and was my introduction to Eisner’s work. Last Day in Vietnam is the first non-technical Eisner book that I have ever read and I now fully understand why Wizard Magazine named him the “Most Influential Comic Artist of All Time.”

Following World War II, the military contracted Will Eisner for many years to create a monthly equipment maintenance manual called PS Magazine. His work took him on-site to both the Korean War and the Vietnam War to gather maintenance stories from military personnel. Last Day in Vietnam is a collection of his encounters during this stage of Eisner’s career. The graphic novel consists of six shorts, not in any apparent order.