Will Eisner Self-Portraits (?) in ‘PS"

FOR IMMEDIATE RELEASE—
FROM: Joe Kubert and Paul E. Fitzgerald
10 – Will Eisner Self-Portraits (?) in”‘PS Magazine”
(LINK: http://thebestofpsmagazine1951-2011.blogspot.com )
For the tenth blogpost in our ongoing, year-long salute to “PS Magazine” in its Sixtieth Anniversary Year, we’re not exactly certain about what we’re presenting. At first blush, it would seem to be a series of Will Eisner self-portraits in a ‘PS” continuity. However . . .
Considering the deadly serious, hard-nosed, poker-faced, businessman persona that Will Eisner paraded on display for much of the time, his occasional injections of whimsy and caprice into his art and his conversations could be rather startling. There’s no telling just what combination of circumstances combined in 1967 to result in his “PS” continuity for the August issue. It combined a “stone age mechanic” and a television anchor/interviewer to impart an essential technical message regarding the calibrating of tools. He is cast in the newsman-role, and, it would seem, six self-portraits are sprinkled across the six-page sequence.
The montage below displays three of them. All six pages are included in the blogpost.
Joe Kubert throws a flag on the field, pointing out that the sequence lacks an Eisner signature.
The discussion continues at : http://thebestofpsmagazine1951-2011.blogspot.com

¶ The Magic of Eisenshpritz in PS

¶ A Covey of Connie Covers 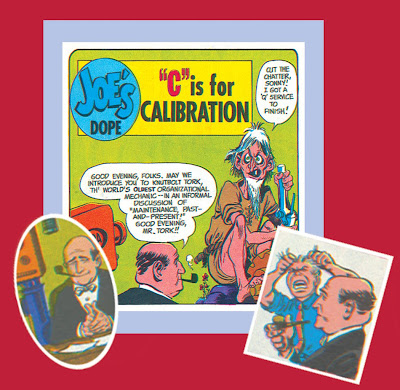